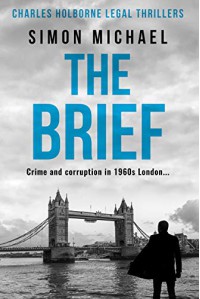 The Brief by Simon Michael is a legal thriller that takes place in the '60s, a British whodunnit. The British are known to tell a great story, especially the mysteries. This one is no exception. A story of crime and corruption right in the legal system.

Barrister Charles Holborne is not a popular person, as he is a Jewish East Ender, not wanted in the "prestigious Establishment profession". He gets a high profile case that he hopes will help turn around his life. But when his wife is murdered, he becomes a suspect and he must run for his life, trying to find out who the killer is. He gets the help of a clerk in the office that he works in to help him as he has nowhere else to go but to her.

A good British mystery is one that keeps you guessing until the end. The characters were well written and the British legal system explained so it was more understandable. I liked this book and do want to read the next one in the series as I think that The Brief is a good start to the series. Loved it as I love a great British mystery!