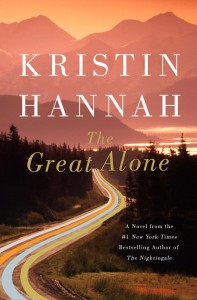 Every once in a while, if you're lucky, you come across a book that is always on your mind.  You find yourself at work, the grocery store, yoga class, wondering what the characters are doing, if they're okay, what adventure lies ahead.

The Great Alone, by Kristin Hannah, is one of those books.  It is persistently unputdownable.  It is incredibly written and a lovely sort of haunting.
In the Vietnam Era in America, with a country divided and men returning home as zombies, mere shadows of the men they were when they left, lives were irrevocably changed.
Set during this tumultuous time, Hannah tells the coming of age tale of Leni Allbright, who suddenly finds herself and her life being uprooted by her dad's latest and greatest idea.
A veteran and POW, Ernt Allbright receives news that a fallen comrade has left his homestead as his legacy to Ernt.  In Alaska.  What better way to heal all wounds than to start fresh?
The Allbrights, Leni, her mother Cora, and Ernt, soon find themselves standing in the Alaskan wilderness, completely unprepared.  Hannah paints Alaska as a character in itself, so beautifully majestic that her deadliness is shocking and unexpected.  And the fear of what can kill you (which is pretty much everything) quickly moves from the outside into the home they have built from the shambles of their inherited house.
Life quickly turns into a struggle for survival as Ernt becomes increasingly violent and abusive and the women have no choice but to somehow find a way out.  Find a way to survive.
Guest Review by Kate Kelly