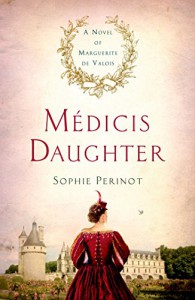 Renaissance France was a time in history known as the rebirth of culture, including art, literature, and music. Medici's Daughter takes place during this rebirth. The Valois family included King Henry II of France Catherine de' Medici, Margaret was the sister of Kings Francis II, Charles IX and Henry III of France, and Queen Elizabeth of Spain . In this novel, though, King Henry II and King Francis II are already deceased and Charles IX is king but rules under his mother's thumb.

Margaret (Margot) is a young girl when the story starts and we see her grow up to be a young woman. Always trying to do what is right to please her mother, who is not easily pleased, especially of Margot. When she falls in love with Duc de Guise who was not a favorite of her brother King Charles or her other brother Anjou. She is forced to marry Henry, King of Navarre. The reason is for the peace between the Catholics and Huguenots. She expresses her desire to marry deGuise and is beaten by her brother's.

Peace does not come though as shortly after the wedding is St.Bartholomew's Massacre in which the Huguenots uprise in the streets of Paris supposedly instigated by Catherine de Medici. Margot saved her husband's life and convinced him to pretend to convert to Catholicism.

While reading this novel I came to like Margaret and really dislike her mother and brothers. After Margot came into her own and realized just how cruel her family was, was when I really started to like her. I love a strong female historical figure and it was nice to read about a sometimes forgotten woman in history. Medici's Daughter is filled with court intrigue, good secondary characters, and a love that was not meant to be. Historical fiction has always been my favorite genre to read and with authors like Sophie Perinot, it continues to be my favorite. I give it five stars!