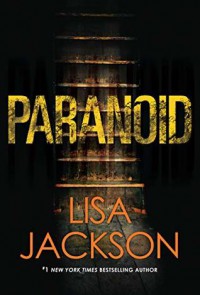 Paranoid by Lisa Jackson is the story of Rachel Gaston, who lives in Edgewater Oregon with her son and daughter. She is divorced from Detective Cade Ryder but they do have an amicable relationship if only for the kids.
Twenty years ago, Rachel along with some classmates was in an abandoned fish factory with pellet air guns when hers was replaced with a real gun, unbeknownst to her. When someone jumps out she panics and shoots, finds out that the person she shot was her half brother Luke.
Despite counseling Rachel still feels that it was her fault that her brother is dead and blames herself after all of these years. A high school reunion is being planned, she feels that there are objects being moved in her house, whiffs of cologne and cigarette smoke is in the air. She is being tailed and feels that someone is watching her home.
Now that there are classmates being murdered her paranoia increases.
Her ex knows that Rachel has issues but he is not sure whether to believe her or not as to her paranoia. Not only that, her daughter has been sneaking out at night to be with a guy whom Rachel is not fond of. So all of these things come to a horrifying conclusion that I did not see coming.
I had not read a Lisa Jackson novel in quite a few years and I am not sure why I haven't as I do remember enjoying them. This one was no exception. This book is character driven and is believable. I love the writing as it was pretty suspenseful and I did not see the ending coming but I like to think that the ending is such that there is another book coming with the same characters.
I think that if you enjoy a good psychological thriller that you can't go wrong with the novel.